The Pazo do Castro is located in the Sil Valley in the region of Valdeorras, between Ribeira Sacra, The ski resort of Manzaneda and the Roman period gold mines of Las Médulas, declared a World Heritage Site. The Pazo do Castro is located in the ideal place to get to know the beautiful landscapes of inland Galicia, the Riveira where you can take a catamaran ride and visit the medieval monasteries, the Natural Park of Serra da Lastra, the Via Nova, which runs through the Villa do Castro itself, the wine route, the D.O. Valdeorras… 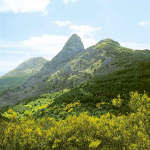 The Serra da Enciña da Lastra is Galicia’s natural eastern boundary. Its limestone summits are a rarity in the Galician countryside, where granite predominates.

To get there you have to cross the Natural Park via Covas, the N-120 Ponferrada-Ourense highway and the railway tracks.

The mountain range of AS TREVINCAS rises up from a level of 1000 metres over the lands of Valdeorresas (Ourense), La Cabrera (León), and Sanabria (Zamora).

There are three main peaks – Peña Trevinca Sur (2.127m), Pena Negra (2123m) and A Survia (2112m). They are composed of slate mixed with quartzite and sandstone and it is this that gives the mountains their abrupt and complex relief.

Peña Trevinca has facilities for skiing and holds the honour of being the highest mountain in Galicia.

Covering an area of approximately 2000 hectares its location means it is an ideal spot in both summer and winter, as it has everything you’ll need for a range of mountain sports including skiing, hiking, climbing, mountain biking, etc.
Manzaneda has Galicia’s largest ski resort with over 15 km of pistes, modern lifts and rentals as well as a heated pool, tennis courts and facilities for horse riding.
The best views can be had looking either in this direction or northwards towards the ranges of Manzaneda and Trives. The sharp peaks can be seen in the distance, overlooking a vast number of small villages scattered across the hillsides and valleys. 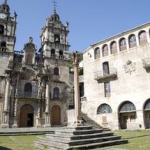 This sanctuary has a profusely decorated façade and Solomonic columns decorated with floral motifs. It is considered to be one of the most important Baroque works in Galicia.
As Ermitas, built on the orders of the Bishop of Astorga in 1624, has two towers which are divided into five sections, each of which are different. Inside the sanctuary there are a number of altarpieces, the main altarpiece being the standout due to its lavish design.

Declared a World Heritage Site it is a must see area thanks to its great beauty and archaeological riches. It was the largest gold mine of the Roman Empire and in this red landscape it is easy to see the historic footprint of the Romans.

The Cañón del Sil is a steep-sided valley created by tectonic movement. It is located between Ourense and Lugo and is 35 km long and covers an area of 5914 hectares. Some of the walls of the valley are more than 500m high in places. The canyon’s steep slopes provide an awe-inspiring landscape with their mix of whimsical shapes created by erosion of the rocks, artificial terraces created to cultivate the vines and the reservoirs on the river which generate hydroelectric power.
There are two ways to enjoy your visit: from the river on one of the catamarans which ply its waters, sailing along the waters and appreciating the grandeur of the canyon with its almost vertical walls and the whimsical shapes of the rocks caused by erosion; or from above, touring the surrounding road and stopping at the viewpoints such as the Balcones de Madrid or the Monastery of Santa Cristina.

One of the most important tourist trails along the Vía Nova can be found in Valdeorras. Along the way you’ll locate some of the stations which are cited in the Antonine Itinerary: Foro in Valdeorras and Gemestrario in the Sierra de la Enciña da Lastra. These stations covered all the needs of those travelling along the route. They were an accommodation network offering food and lodgings, repairs, change of animals and so on. They were distributed along the route at distances calculated as that which a person could cover in one day.
The Itinerary that the Vía Nova takes through our region is as follows: starting in Terra de Valdeorras then towards Codos de Larouco, Larouco, Freixido and Ponte de A Cigarrosa, passing through Forum Cigurrorum, San Miguel de Outeiro, Vilamartín, A Rodeleira, Arcos, San Salvador de A Pobra, O Castro, O Córrego, O Regueiral, Rubiá, Robledo da Lastra, Os Arroxos, Tralaportela, Pedraponce and Pena Tallada to reach the station at Gemestrario. It then continues towards Bergidum Flavium in Cacabelos (León). 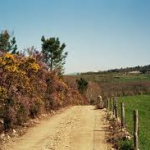 The Camino de Invierno a Santiago, which deviates from the French Way in Ponferrada to bypass the steep climb up Piedrafita –especially in winter–, arrives in Santiago after passing through El Bierzo to the south, Valdeorras, la Ribeira Sacra, Deza and finally, after joining the Ruta de la Plata in Lalín, leads you to the capital of Galicia. This route is very old and it has been documented that it was well used by pilgrims who preferred a relaxed alternative with a generally mild climate in winter. The Camino de Invierno covers a distance of 30 kilometres as it passes through the region of Valdeorras. The first major settlement on this section is Sobradelo where you cross the Sil via the Puente Nuevo to continue el Camino along the right bank of the river. Éntoma is the next village before reaching O Barco where you enter along the Calle Real, and you exit the municipality of O Barco via A Proba. The Camino continues on through Arcos, Vilamartín, San Miguel and A Rúa where you leave the region of Valdeorras to enter, via Montefurado and Quiroga, the region of Lemos. In the Ribeira Sacra, the Camino de Invierno covers a distance of 100 kilometres until it reaches the Comarca del Deza, in the province of Pontevedra. Here, you need to cover another 42 kilometres – the distance remaining before reaching Lalín – where the route joins up with the Ruta de la Plata. Another 57 kilometres further on, you eventually reach Santiago.